Scotland is currently uniquely placed in the UK, and among only a handful of countries across the world, in developing new legislation for the food system.

On Wednesday 11th January, the Scottish Food Coalition kicked off a new event series, which will be looking at the opportunity of the Good Food Nation bill to transform Scotland’s food system. Professor Corinna Hawkes, Director of the Centre for Food Policy at City University, London, presented a broad overview of the potential of legislation to make a difference, and put Scotland’s Good Food Nation bill in a global context.

A recording of Professor Hawkes's presentation at the University of Edinburgh is available here. 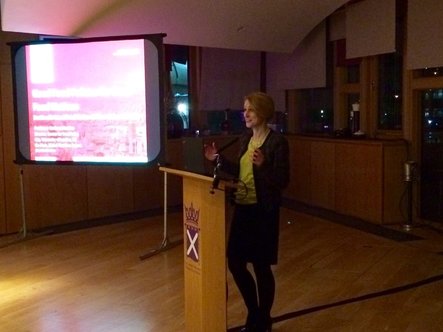 Corinna reminded audiences at the Scottish Parliament and the University of Edinburgh that food is key to delivering all of the Sustainable Development Goals. She was passionate that although food is currently at the heart of some of the world’s major problems – from climate change to social justice, public health to sustainable resource use – it also offers ways to resolve these issues. In fact, already a multitude of solutions are being proposed and implemented by countries, cities, companies and communities all over the world.

To name but a few, France has just implemented a new law against food waste; Chile has introduced a raft of policy measures to promote healthy diets; Amsterdam have bucked the trend of increasing child obesity and reported a reduction of 10% in obesity rates following the introduction of their city food strategy. In Nairobi, the promotion of urban agriculture is providing local food security and youth employment opportunities. In São Paulo 30% of school meals are sourced from local family farms, supporting the livelihoods of farmers and ensuring the freshness and quality of the food. In New York City there are statutory reporting requirements on food initiatives, ensuring action is effective and facilitating transparency and participation.

As well as the many examples of governments and local authorities taking action, there are countless initiatives from businesses and civil society also aiming to improve health, fairness and sustainability in our food system. What is lacking, Corinna argued, is coherence. If we recognise that there is a food system, then initiatives would be stronger if they were delivered in an integrated way. Corinna developed this point by presenting a number of conflicting interests relating to food.

For example, in order to reduce poverty and generate incomes to contribute to people’s food security the World Bank invests in palm oil production. At the same time the World Health Organisation aims to create health-promoting environments and reduce saturated fatty acids in foods. These conflicting objectives, and the actions that follow them, were formulated in different spaces.

Professor Hawkes went on to argue that in addition to improving coherence and connection (both between food policies and along the food supply chain), a lot of work is needed to involve the people who are affected by the problems in the development of solutions. This includes involving people in defining the problem, and listening to why choices are being made. Professor Hawkes was emphatic ‘we must treat people as if they have agency’. She described an example from her work in Mexico, where some people were choosing fizzy drinks because they didn’t trust the drinking water. A sugary drinks tax, therefore, is only part of the solution, what is needed is investment in clean drinking water. Funds raised from Mexico’s sugary drinks tax are now providing water fountains in schools.

Professor Hawkes concluded that what was missing was statutory frameworks which:
Richard Lochhead MSP, former Cabinet Secretary for Rural Affairs and the Environment (pictured below with Professor Hawkes) reflected that she had left the Holyrood audience, which included MSPs and civil servants, with a lot of inspiration. 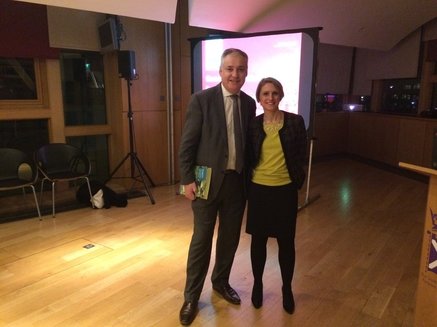 The Scottish Food Coalition's briefing paper on the Good Food Nation Bill, the Sustainable Development Goals and the Right to Food is available here.